Doing it for the Girls Their job doesn’t require wearing a hard hat and steel toe capped boots, but these young women, business administration apprentices, are as embedded in the construction sites of Tower Hamlets as the workers digging the foundations and hoisting the steel beams.

We can thank Taahira, a Tower Hamlets resident for setting this trend and spreading news of the opportunities available to her circle of friends.

Taahira was referred by her advisor at Poplar JCP to attend an employability course at Tower Hamlets College. The college was impressed with Taahira’s commitment and willingness to learn and on successful completion of the course suggested we consider her for a Business Administration Apprenticeship. As a NAS accredited ATA, K10 employed Taahira and she became a ‘Legacy Apprentice’, hosted by BAM Nuttall on the transformation of the Queen Elizabeth Olympic Park. Taahira took responsibility for managing the Accreditation Centre, having to work in a fast paced and very busy environment with approximately 20,000 Visitor Passes having been issued. As other opportunities materialised, Taahira was encouraging her friends to apply.

“I was really enjoying my apprenticeship. Not only in terms of the work skills and theory I was learning but all my friends, family and work colleagues noticed how much my confidence had increased. I was really shy before I started and now I enjoy and join in with the banter of working life. As soon as my friends heard about what I was doing they were really keen to do the same thing. When I heard there were further opportunities on QEOP, I encouraged two of my friends to apply.”

Both young women, Tower Hamlets residents, were successful throughout the recruitment process and started a K10 Apprenticeship, also hosted by BAM Nuttall on QEOP. One of them completed their apprenticeship at the beginning of this year and is now working for BAM Nuttall directly as an Accounts Clerk.

The transformation works on the park came to a completion simultaneously with Taahira completing her apprenticeship in October 2013 and K10 recruited her to become part of their HQ team where she has become a very valued member.

Since then, 2 more friends and her sister have joined the K10 Apprenticeship program. Humaira Begum (Taahira’s sister), has been hosted by Berkeley Homes on Goodman’s Fields. Humaira has followed in her sister’s footsteps having made such a positive impression, Berkeley’s are now taking her on directly. Mohima Aktar also started her K10 Apprenticeship on the same site, and after only 8 weeks was also snapped up and employed directly by Berkeley Homes where she will complete her qualifications.

Farhana Rouf is another local friend of Taahira’s and K10’s most recent addition to the program. She is being hosted by Erith Contractors.

“I have a lot of friends that live locally and are still looking for work. I think now they can see that me and most of my other friends have got full-time jobs having done the apprenticeship they all want to do it. People should grab opportunities like these; we are proof of what can be achieved. If anyone had suggested that my sister and I, let alone a bunch of my friends would be working full-time in construction and have qualifications 18 months ago I would have probably just laughed, but here we are!” 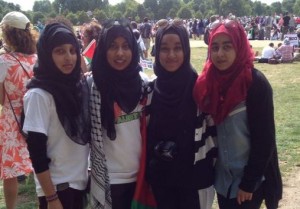