Background: Prior to K10, Sayekhul was working as a sales assistant in Poundland. He had completed his Level 2 Plumbing Technical Certificate in College but in order for him to become fully qualified, he needed an opportunity to gain on site work to attain his NVQ element.

During the Apprenticeship: At the time that Sayekhul applied, K10 had recently started working on behalf of the housing association, Catalyst on their Portobello Square site near Ladbroke Grove. Sayekhul at the time was a resident of Catalyst and K10 were able to 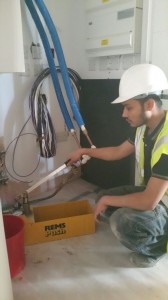 secure a Plumbing Apprenticeship for him on the site with the main contractor Ardmore. ‘During my time on site, I was given the opportunity to carry out a variety of tasks that made up my qualification. Portobello Square was in a close vicinity to my residential address which made it convenient and financially viable.’

‘I really enjoyed my time on site, and my Apprenticeship Manager at K10, Peter was on hand to ensure both my college and work was all on track and I was able to complete my qualification within the given timeframe. Working with Catalyst was enjoyable as they constantly checked up on me and made sure I was doing well which I liked. The aspects of plumbing I was given access to included; 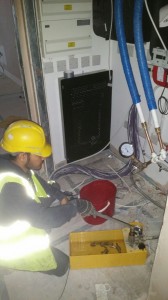 kitchen installs, bathroom installs, boiler work, soldering, soil stacks and testing. This benefited me as I was always collecting work for my NVQ. My site manager, Nawfel Hemour, supported me throughout my apprenticeship and gave me access to a wide range of tasks. I would like to thank him for his patience and backing throughout the process. One piece of advice that I would pass on to future apprentices is to ensure that they get the theory element completed in a timely manner to ensure the qualification doesn’t extend unnecessarily.’

‘Working for K10 was really positive. I was put on an excellent site for my placement and the work was there for me to do. Without K10 I wouldn’t have gotten my NVQ and I wouldn’t have the career I have right now’.

After the Apprenticeship: Sayekhul completed his apprenticeship in March and since then has secured work with an industry-leading mechanical contractor as a full-time Plumber.

Congratulations Sayekhul, your positivity, and energy throughout the apprenticeship made it a genuine pleasure to work with you and assist you in gaining your qualification!